The goal setting process that I’ve had most success with encourages setting goals that create balance and complete a cycle of give and take.

Like most things in life, we must find a balance. You can’t give without taking, you shouldn’t take without giving in return. And the funny thing I’ve noticed is that it doesn’t seem to matter whether you give back in the same place that you took or not, because somehow everything balances out.

One area of goal setting I challenge my clients to set a goal in I call ‘unthinkable goals’ because, left to their own, most people won’t think about setting goals in this area of focus. Yet, interestingly, it is these unthinkable goals that usually turn out to be the ones that lead to the greatest rewards. 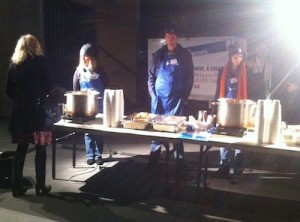 I took this photo of the St Vincent de Paul Soup Kitchen in Canberra when I took part in the CEO Sleepout in mid winter this year.

I’ll give you an example:

About four years ago, one of my executive coaching clients set some long-term and some short-term goals in each of four areas of his life, including one ‘unthinkable goal’.

The idea of the unthinkable quadrant is to set at least one goal, the objective of which is to give back in some way to the community, usually by making some form of voluntary contribution to society with no aim of any reward, save for the pleasure of knowing you have helped in some way.

After the first 18 months of coaching, he began to achieve some of the personal goals he had set for himself in his relationships and his career. His unthinkable goal wasn’t considered in this first 18 months, but it remained on his goal list.

Eventually he got around to taking action and today, two years later he still volunteers roughly 2-4 hours a week helping some of those less fortunate in the community. His volunteer work has introduced him to a wide range of people in the community who have helped to enrich his life in many unforeseen ways.

‘Now every time I walk down the street, two or three people will stop me to say hello and I really feel like I belong here. I think too many people live like I used to, in their own little world with no real understanding of the possibilities right on their doorstep.’

As we approach the season of giving and making New Years Resolutions, perhaps you could consider setting yourself an unthinkable goal too? It may change your life in more ways than you can imagine.

If you’d like some help with goal setting or any other life related matters, why not try my gift voucher?