Tough love and self esteem

It all started at 3pm yesterday:

A ten year old’s pirate party sleepover. Of course if you are turning 10, you’d invite ten 10 year old boys wouldn’t you? – It is amazing how much noise ten excited little 10 year olds can generate.

But all was not happy

One little boy burst into tears withing the first 30 minutes. After that drama, which wasn’t caused by anything that we could see, there was another drama … it was the same kid! – Interesting. 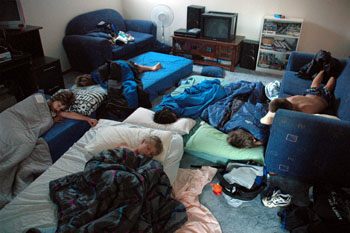 They are so quiet on the morning after

By 8pm, one sulking little boy sat on the front veranda – you guessed it – the same kid!  All the other kids were having a great (and noisy) time downstairs in the party room. After talking to the other kids, all of whom claimed to have no idea what had happened, I decided to sit with him for a while and see if I could get to the bottom of the problem.

It didn’t matter what I asked him, he wasn’t saying anything. So I asked if he wanted to go for a walk – bingo – he said yes, and I knew that if I could walk with him we’d be able to strike up some level of conversation.

As we strolled along the street in the dark, I discovered quite a lot. In a nutshell, his life revolves around playing games on his computer in his room. He often gets upset playing with kids at school. Frequently gets in trouble for not playing well with his sister, doesn’t play any team sports and isn’t involved with any organisations, such as Cubs or similar.

He has formed a self belief that he is different and doesn’t fit in. Unfortunately, when he has a tantrum, his parents pander to his whims, giving him what he wants to make him ‘happy’.

Basically, he has trouble in social situations and it doesn’t matter what gathering he goes to, he will always, either consciously or sub-consciously, do things to satisfy his negative self belief.

The worst thing a parent could do with a child like this is to give him what he wants. In this boy’s case, he wants to hide – to go to his room and play on the computer. He wants to be safe. He wants an escape from any social challenges, because being by himself is easier.

He wanted to go home and because he was putting such a downer on the sleepover (and there was obviously worst to come), we decided to give the problem back to his parents.

When we delivered the boy home, his father made a lot of excuses for the child’s behaviour. It seemed obvious to us that a key problem was the father. The boy has his parents wrapped around his little finger.

This boy has some serious self esteem and social issues that he will carry throughout his life until as an adult, he seeks professional help. Unfortunately his parents have already done the damage by simply giving him whatever would stop him crying.

Tough love is sadly long overdue for this little boy, and I worry about how he will go when he gets into his teenage years.