Two days they will never forget 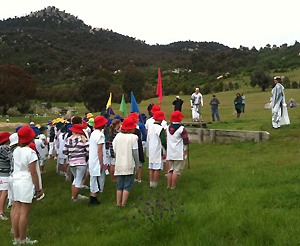 This wasn?t your typical inter-school athletics carnival, where the object is to find out which children are the fastest, strongest, most skilled etc. This was an immersive educational experience for children in Class 5 who are studying ancient Greece.

Over the term, the kids have been learning about life and culture in ancient Greece and the subject culminates in a two day inter-school Olympic Games.

Children from three schools are split into five competing teams representing five city-states of ancient Greece. Rather than pit school against school as is traditionally done, these kids are formed into mixed teams made up of children from each of the schools. 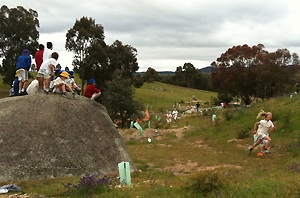 The girls got a go at the marathon too. Note the boys on the rock cheering them on

They wear togas in their city colours and compete for the city-states of Thebes, Sparta, Athens, Megara and Corinth.

Prior to the games, the children have been learning about their city-states so that they understand whom they are competing for. The names of these city-state teams actually mean something to the kids.

They compete in wrestling, javelin, discus, jumping and running, and to make it a lot more interesting, rather than being held on a typical athletics field, the games are held in the foothills of Mt Olympus (actually an area that was once sacred to the Ngunnawal people who had inhabited the land for thousands of years – a significance not lost on the children). 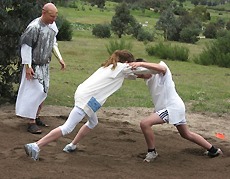 I think that immersive learning experiences like this are so much better for the kids than sitting in class and writing essays.

These children all had a wonderful educational experience that they will remember for the rest of their lives. Well done to the teachers and parents who helped make this a very special event for them.