Every Step an Inspiration

This time last year we were on our first leg of a drive around Australia. At times it was quite hot, dry and dusty. The road trains hurtled past in the opposite direction and created a blast of wind that buffeted our fully laden 4WD. 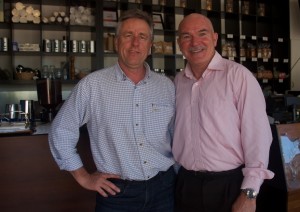 Chatting with Rob De Castella about the Indigenous Marathon Project

Coincidentally, this week I was reminded of our experiences in the dusty 40 degree heat, when I sat down for an hour with Rob De Castella and had a chat about his Indigenous Marathon Project.

We all know that Aboriginal health is far behind that of the average Australian and it seems little has been effective in helping. But Deek decided to do something about it.

‘All the healthy television commercials, all the flyers and all the financial incentives in the world won’t make a dot of difference. What works is when people see one of their own  demonstrating the positive aspects of a different way of life.’

The Indigenous Marathon Project has been running for four years (hard to avoid puns on running stories!) and has proved to be a fantastic success.

The program runs for seven months each year and Aboriginal Australians from all over the country are invited to tryout for a place. Those selected will meet four times over the course of the program, each time for a week long training camp, three of which are times to coincide with a significant running event.

The athletes will build up their weekly running to around 220 to 240 kms per week in training as they prepare for the ultimate challenge, the New York Marathon. This year there are six men and six women representing people from all parts of the country.

The first training camp was held at the Australian Institute of Sport in Canberra where the IMP athletes were given instruction and individually prepared training routines. They then go back to their communities where they have an IMP ambassador who has been chosen to monitor and report on their training.

Many of the ambassadors are past participants in the IMP and many have no choice but to train in the same harsh, dusty conditions that we drove through last year. For some of the runners, their is no choice but to run in the dirt because there is only one bitumen road, the highway, and it is simply too dangerous to train on.

Many indigenous runners continue to be inspired by having a marathon athlete, one of their own people, training around the village and the spin off effect has been the considerable improvements in the mental and physical health of many the locals.