Stand up for Dramatic Effect

My little girl in Jafuska 2005

There is something pretty cool about a group of kids jamming in the garage. As a teenager, my daughter played sax in a band called Jafuska for three of four years and I used to love taking her to practice and later, going to their gigs.

Jafuska played Jazz, Funk and Ska (hence the name) and had quite a few gigs around town, but the band disbanded when they finished school and each went their separate ways.

Now I’m doing the ‘parent groupie’ thing again, but this time with my stepson, Alex.

Alex is our 14 year old and he has really started getting into music this year. He plays lead guitar in a garage band called ‘Dramatic Effect‘ that he and a few of his friends formed in February this year.

But it isn’t the cool, smooth sound of jazz. Dramatic Effect, like many garage bands made up of kids his age, love the sound of metal. 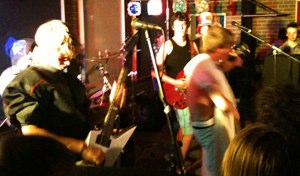 Alex on lead guitar (on left) in the semi-finals

They have already written a dozen songs and have gained quite a following of groupies from school. A few weeks ago they were played on TrippleJ Unearthed and they have recently started to get a few gigs.

(Listen to their song ‘Never’, on TrippleJ and wait for Alex’s guitar solo near the end.)

They were pretty excited when they made it to the semi-finals of a band competition called Lift Off ’09, because first prize is a 2-day recording session.

And then Last Friday they won a place in the finals. It is great to see a bunch of teenagers that are passionate about their music.