We’re just back from Skyfire 2009. What a great promotion this is!

Skyfire is an annual fireworks display at Lake Burley Griffin, right in the heart of Canberra. The spectacular is put on by 104.7, a local radio station which is very popular with the teens. Cleverly they do this with a fair bit of support from the armed services. For the military, it is a chance to be involved with something cool and exciting for the young boys.

Picnickers enjoy the wait at the edge of the lake

This was the 21st staging of Skyfire. What I think is so good about it, is that it brings the community together, it’s a fun family evening that draws plenty of crowds and for the radio station, it arrtacts plenty of publicity in other media, due to it’s status as an ‘event’ on the Canberra calendar.

Last year it was estimated that there were 170,000 people there and this year the crowds were estimated to be bigger. Out of a population of 330,000 in town, that is a lot of people voting with their feet.

The fireworks are put on by Foti International Fireworks, a 7th generation pyrotechnics’s company that also did the crackers for the opening and closing ceremonies for the Sydney 2000 Olympics. 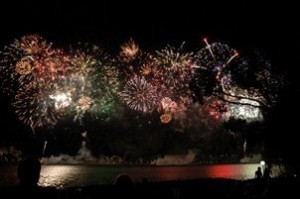 Mr Fortunato Foti said in the Canberra Times that they had over 3000 aerial fireworks, 15 to 20,000 shooting comets, all on a 21-minute soundtrack.

The cool thing about this is that the radio station broadcast the soundtrack as the fireworks go off, so everyone around the lake can take their radios and listen to the music that accompanies the fireworks, which are set up on a series of barges on the lake.

So why was it that out of the 200,000 people around the 5km or so of lakeside, we ended up meeting up with quite a few people we knew?

That’s something I like about this city – it is big enough to find everything you like about a city, but small enought to still have a friendly country town feel.