In our first or second year of life, we all taught ourselves to walk by trial and error. We also learnt to run by the same method. And unless you were lucky enough to have some running training when you were young, the odds are pretty slim that you taught yourself how to run with the most efficient method.

In my City2Surf 100 Day Challenge on Facebook, Meredith asked the question:

Can anyone help? I don’t understand why I get shin splints when I do speed sessions but not when I do a normal run! And why my calves suffer after running up stairs but not hills? I love mixing it up but when I do I have to deal with little injuries!

This is a great question and something all of us can learn from.

Shin splints can take a long time to heal, but the first thing to do is stop doing the activity that causes the pain – no, that doesn’t mean stop running, it means it is time use a more efficient running style. 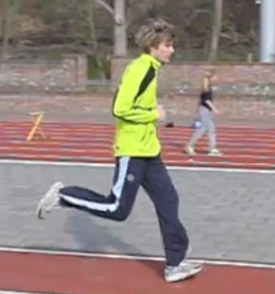 With all effective running styles, the thing that they have in common is that the leading foot strike is always directly under the centre of gravity, which is under the body, not out in front of the body.

When Meredith is jogging her feet are naturally landing directly under her body and most likely they are striking the ground in a relatively flat state which means that there is no pain. The foot landing flat spreads the body’s weight evenly across the foot which gives better stability and less chance of stresses moving across the foot and therefore less chance of injury.

Even if the toes are upturned and the chin taught, if the foot lands under the body instead of out in front on the heel, the chin won’t get the dramatic shock that causes damage to the muscle fibres in the chin.

This change to your running style will also make you go faster because when the leading foot strikes ahead of the body, the body must then be propelled over the leg – think of a pole vaulter – this is inefficient in three ways:

If you are experiencing shin pain now, the best thing to do is push your toes down with one hand and massage your shin with the other to loosen the shin muscles. It does take a long time to heal properly but believe me it will.
I suffered from shin splints for years until I changed my running style and I’ve never had them since.

Calf Pain Running On Stairs But Not On Hills

Meredith’s calfs suffer when she is running up stairs but not running up hills because she is using different styles of running for each activity.

When running up stairs the body is most likely in a fairly vertical stance and most people will run up stairs two at a time (because steps are usually too close together for running up one a t a time). Stairs offer a greater vertical climb than when going up a hill and so usually this causes a bouncing action that puts significant stress on the calves.

When running up the slope of a hill, the gradient is usually a lot less and without the steps to ‘bounce up’, Meredith is more likely to be using a jogging action, that looks more like a shuffle than a bounce, thereby not putting as much strain on the calves.

Running up stairs is an ideal training activity because it helps to strengthen the calves and glutes that will make running up hills a lot easier.

Thanks for the great question Meredith.

Watch this slow motion video of running technique. Don’t focus on the cadence aspect (this guy is very fast!) just focus on his running style.