Taking my Shadow for a Walk

I decided to take our dog ‘Shadow’ for a walk before breakfast yesterday and so was out the door at sunrise. The lighting at that time of the day is just magnificent. 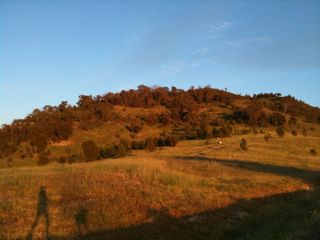 This is me, taking our dog Shadow for his morning walk

It was such a beautiful morning that, I wished I’d brought my SLR’? then I remembered that I had my phone.

I’ve missed a lot of great photographic opportunities in years gone by, but thanks to the person who thought it would be a good idea to put a camera in a phone, now we can capture every moment when and wherever we are (assuming you brought your phone with you!).

Shadow was obviously named ‘Shadow’ because he followed Buddy around all the time.

In some respects, having Shadow around maintains the connection with Buddy, and Shadow has certainly been enjoying extra attention from the kids.