A sad day for all the family

Yesterday we found out that Buddy, our 10-year-old Labrador’s lungs are riddled with tumours and it is only a matter of time. 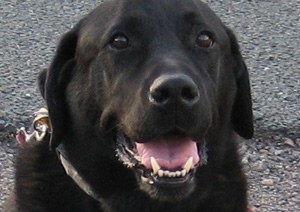 We all have stories about the greatest dog we ever had, but what is different about Buddy is that he is an ex guide dog. Janine has always describes him as a ‘gentleman’ ‘? and the description fits. Buddy is a dog with manners.

When we picked him up from the vet yesterday, I looked into his eyes and it struck me’? I know how sad we are at the inevitability of it all, but I can’t imagine how hard it would have been on his owner had he still been guiding.

We often say that a dog is like a member of the family, but for a blind person Buddy would have been much more.

We were very privileged to get Buddy after he was no longer able to work. A Bullmastiff had attacked him while he was working, tearing his stomach open, which required major surgery. He only survived because he was a guide dog that had already had $20,000+ of training.

Unfortunately, after the attack, Buddy lost focus when guiding whenever other dogs were around, and so he was retired in the prime of his life. And as luck would have it, he came to live with us.

Buddy is still very happy, his tail still wags with some ferocity, and we are told that he isn’t in pain. But now it is a waiting game.