I’m not a sports physio and I don’t like running injuries so I try my best to avoid them. Having said that, I have had a fair few, so if you have an injury, I can empathise with you.

Running injuries usually come in the form of pains in the joints, pulled muscles, twisted ankles, stress fractures (such as shin splints), and tendinitis. And when you start to do longer distances, you may also get blisters and chaffing, (and chaffed nipples, which can be rather painful!).

httpv://www.youtube.com/watch?v=fvvRnu3GoeA One of the important things I’ve learnt over the years is that the real key to avoiding injuries is to listen to your body. You need to learn to be aware of what your body is telling you.

Most of injuries are preventable, if you pay attention to your body. For example, when I started getting a pain in my knee, I didn’t slow down and let it heal properly, subsequently, it became worse and I had a much longer recovery period.

Another time, I got shin splints (a stress fracture in the shin) caused by training too hard on a hard surface after a long period running abstinence.  Shin splints are rather nasty and can take six months or more to recover from, depending on how you manage it.

One of the things I’ve noticed with any injury is that one injury almost always leads to another. My worst injury occurred when I stacked water skiing in 2007. My left leg was forced up over my head causing my bicep hamstring to detach from the hip and tearing tendons and my gluteus maximus (my butt). 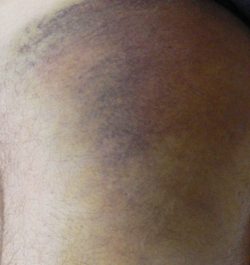 My torn hamstring the next morning. By the end of the day the brusing went from near my foot to part way up my back.

I’ll spare you the details, but the end result is that I received very poor attention in hospital and it wasn’t until many months later when I still had no power in my leg that my physio diagnosed the hamstring as being a detached. Further investigation revealed that should have been operated on at the time and now I just have to live with it.

The result is that I have very poor strength in my left leg with certain movements. And in fact I still have difficulty wiping my left foot on a doormat without some muscular pain.

When I started jogging again, I had a dreadful limp which is still obvious when I pick up my pace or when jogging uphill. This limp initially put my body out of balance and this led to a dreadful cramp in my right calf along with some other aches, many of which still recur at times when I put a bit of effort into my running.

But you don’t have to have a dramatic accident to find yourself with running injuries.

The big message here is listen to your body, if you start to feel a pain or an ache, ask yourself, ‘what could be causing it?’. Since my water skiing accident, I’ve become much more aware of listening to my body. One of my realisations is that most running injuries are preventable with a change in running action or better running shoes.

Have you ever tried sitting still with your eyes closed and just listening. You’ll hear a lot of sounds that ordinarily you aren’t aware of such as birds, maybe dogs, water, wind, cars in the distance etc. Using the same principal, try running without distractions such as your iPod and try to focus on the feelings coming from the different muscle groups and joints in your body as you jog or run.

You’ll be surprised how much your body is telling you if only you listened.