Of jogging and tomatoes

Well my foot seems to have repaired itself so I’m back to doing my morning jogs – but you’re probably wondering where I’m going with that rambling headline?

You may remember my elation at our abundant crop of delicious tomatoes and my recent article about saving money with vege patches… (so it will come as no surprise if I tell you that I am partial to a few tasty comestibles!) 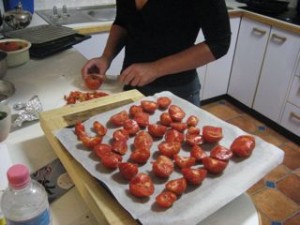 It turns out that we’ve actually got a few too many tomatoes, so we gave some away and we Googled recipies for sun-dried tomatoes and last night set about making same.

I was quite excited by this project because I love sun-dried tomatoes. The recepie called for a tray of tomatoes which it claimed would fit into a jar.

I ground up the spices while Janine cut the fruit, then she sprinkled the lot with the spice mix and stuck them in the oven on low (simulated sun) overnight. I took the photo last night and planned to take another shot when we pulled them out in the morning all shriveled up and smelling delicious.

When I got up, I turned the oven off and said to Janine, ‘don’t bottle them till I get back because I want to take a pic’. Why someone would want to take a photo of shrivled up tomatoes, is probably a good question!! 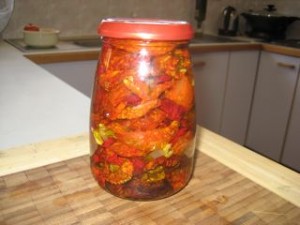 Anyway, I did my usual 10km morning jog and returned to see a beautifully bottled jar of sun-dried tomatoes on the kitchen bench. Oh well, you’ll just have to take my word for it, that they looked deliciously like sun-dried tomatoes.

For lunch we made a nice salad and cracked open our one and only jar of home grown, home made sun-dried tomatoes – and I have to say they are fabulous.

I mentioned in my article about growing vegetables that it isn’t about growing our own to save money, it is really about the satisfaction of doing it yourself.

I think everone should try and grow something themselves. Along with satisfaction of doing it yourself, you’ll also be rewarded by fresher produce with a much more flavour.