No time to run yesterday but I did it

Yesterday I had planned to run a 10km before breakfast but circumstances meant that I didn’t have enough time available. The temptation is to run a 5km, do nothing or reschedule a 10km run for another day; but I did none of these. 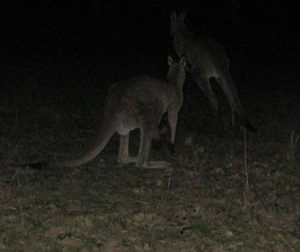 Scaring the kangaroos while running after dark

A few years ago I had a friend who was a very good half marathon runner. He had been quite sick for around six weeks leading up to the Sydney Half Marathon and had done no training whatsoever.

He hadn’t planned on competing that year because of his poor condition, but as a seeded runner the previous year, when he received his invitation to again compete he couldn’t resist and started to train with only three weeks to go before the event.

His training method was to do many short runs, and in fact, he didn’t do race distance until the day of the event. What he told me was that if you run a 5km in the morning and another 5km at lunchtime or at the latest on the evening of the same day, you get the same benefit as if you had run a 10km.

He ran in the morning and then did a lunchtime run four days a week. He ended up placing in the top 15 in the Sydney Half Marathon.

Not a good idea to run through the bush in the dark!

Yesterday I employed this technique for the first time, doing a 5km run in the morning and a 5km run at day’s end. Unfortunately it was so dark when I finished my run that I had to walk the last kilometre, so as not to twist an ankle on the rough track.

Although I really didn’t want to go for a run at all yesterday, I forced myself to do a freezing run in the morning and another in the evening so now I feel great in the knowledge that I did what I set out to do.