I remember when we drove down to Sydney to run the first City to Surf in 1971 (now called City2Surf).

It was a very early start for us, as we lived in the Blue Mountains at the time, and my father always wanted to get to an event with time to spare, so we left at about 6am for the drive to Sydney. No freeway in those days, so it was a long drive along a single lane highway that meandered through Penrith, StMarys and Parramatta. 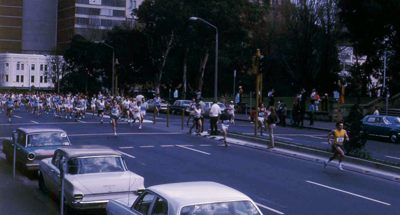 We parked in College Street and then walked to Sydney Town Hall to get our registration sorted out. Everyone had to sign in at the Town Hall and collect his or her number for the run. We’d never seen anything like this bustle of excited runners before. And then there was the smell of ‘Deep Heat‘, which as a small kid, was a new one for me.

The people handing out the numbers had number blanks and then the numbers were all stickers. As you signed in, they would record your number and make it right before your eyes with stickers for each numeral.

We got our numbers and then went back to the car to get out of our tracksuits and pin our numbers on. My father had to have a cup of tea. We never went anywhere without a thermos of hot water! Then we made our way back to Town Hall for the start. My mother was the designated driver and she watched the start and took photos before driving to the finish to meet us with warm clothes and a picnic lunch.

Those were different times; if you are going in your first City2Surf these days, don’t even think of parking in College Street and then driving to Bondi in time to meet your loved ones’? you won’t get near College Street, let alone park in it. 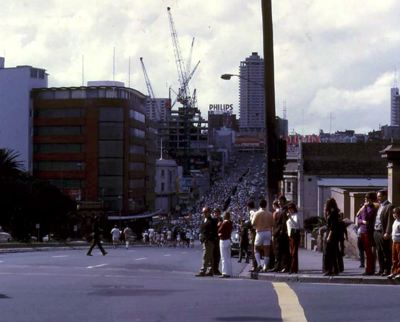 Onlookers watch the full City to Surf field head up to Kings Cross. There was no tunnel in those days so we actually ran over the top of the hill.

In the early days, the City2Surf started at George Street, right beside the Town Hall. So the run started with a short, steep uphill. I remember starting fairly close to the Town Hall steps on Druitt Street in what at the time I thought was a massive crowd of 2000 runners. A far cry from the 70,000 that take part today.

The City to Surf was 9.4 miles (15.12km) from Sydney Town Hall to Bondi Beach and you had to complete it in less than 100 minutes. A fact my father made very clear to me, as I would be running on my own for most of the run. For many years the roads were reopened to traffic after 100 minutes and if you didn’t finish in less than 100 minutes, your time wasn’t recorded.

It is a lot easier to run the City2Surf in under 100 minutes these days, because not only is the event 1.12 kilometres shorter, but you also don’t have to run it in Dunlop sandshoes which had absolutely no cushioning in them at all … and at least one of the hills is not as high! Kings Cross has a tunnel cutting through it, so you don’t have to run over the top as we did for a few years.