Another Milestone of Life

There are many milestones in one’s life. I recently wrote about my best friend Brian becoming a grandfather but today it was our turn as we reached a milestone of our own. 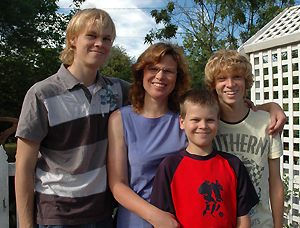 Last Saturday he was a teenager

Janine and I were both the eldest children in our families, so we were each first to leave home. Neither of us had ever lived in a house where someone else had left home.

But as a parent, when your firstborn finishes school and leaves home at the tender age of 18 years, it is a milestone that changes your life forever. You do feel older (but not as old as a grandparent!)

It was with very mixed emotions that we said goodbye to Callum as he boarded the bus this morning. Suddenly it struck us that this was the last time we’d see the boy, because when he returns after 12 months of intensive military training, he will be a man, confident, capable and disciplined. 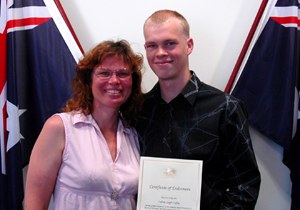 Today he became a military cadet.

Perhaps it was that farewell haircut his friends gave him on Sunday night, or the years of Tae Kwon Do training that made standing at ease second nature to him, but whatever it was, he looked like he’ll fit into military life like a hand in a glove.

Mummy’s little boy is all grown up now and we are left with a different family dynamic for 2010. With only two boys to care for, we’re expecting it to be a bit quieter around the house this year.

Good luck Callum’? see you when we see you!