My Memories of Bryce Courtenay 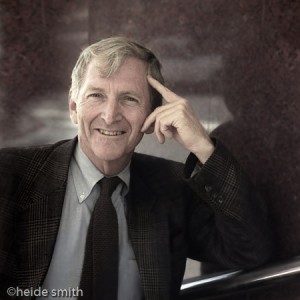 Bryce Courtenay was a great influence in my early career.

Like many others, I was saddened to hear of his passing this week. He will be remembered as an author who left a great body of work that we will continue to enjoy, but my memory of Bryce is from a different time.

About 15 years ago, I decided to jot down my memories of my early life in advertising industry. Here is an extract containing my first meeting with him:

It was yet another gorgeous Sydney Autumn day; a little humid, but I didn’t have far to walk. I was on my way up the hill from North Sydney Railway Station to see a man about a job.

The week before, I had laboriously typed up 20 letters and posted them to advertising agencies asking for a job. I had done this a couple of times in the past and it had resulted in a few freelance projects, but never a full time job. These looked pretty fancy as I had typed them on my dad’s Apple 11c and printed them on the dot matrix printer.

I had received four responses. None of the agencies actually had jobs available, but four of them were prepared to see my book (portfolio of work) so I considered that a good result.

Harris, Robinson Courtenay was a small agency with a reputation for good quality work. I was nearly run over whilst crossing the driveway of a service station on my way up the hill but arrived unscathed with a few minutes to spare.

My meeting was with the Creative Director, Bryce Courtenay. He invited me into his office and proceeded to browse through my book. ‘Your work is good, but it’s not likely to appeal to agencies,’ he told me.

Bryce was very busy at the time, but went out of his way to try to help me understand what it was that agencies were looking for and how and what to present that would appeal to agency executives.

I was there for a little over an hour. ‘You have a good variety of work here. And good quality published material, but we don’t want to see ads, we’re looking for campaigns …’ he continued. 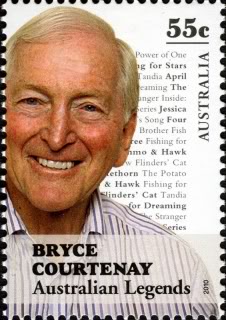 He never would have got his mug on a stamp if he’d stayed in the ad game!

The advice he freely shared proved invaluable throughout my life.

I was to meet Bryce on only two other occasions, once in the board room of George Patterson Advertising, when he was a Creative Director there, and again not long after he had finished his first book but before it had been published.

When he was working in the advertising industry, he told me that he had trouble finding the time to write, that was until the day he realised that all he had to do was squeeze another 30 minutes or an hour into each day and it would get done. So it was that he stayed up each night and wrote.

He told me a very funny story about going outside for some reason in his pajamas in the early hours of the morning and getting locked out. Unfortunately I don’t remember the details, but I think police were called and he was carted off because he couldn’t wake anyone inside and had no proof of identity. The upshot of it all was that he ended up attending a client meeting for the ad agency unshaven and still in his pajamas having come directly from the lock up.

Rest in Peace Bryce, you remain an inspiration to me.

The passing of others whose life touched mine; Mike Leyland, Tommy Cuff