Keeping up with technology

The other day, my friend John asked me how I kept track of people’s names and phone numbers. Every time he has lost a phone, or bought a new one, he gets particularly frustrated by having lost his old phone along with all his contact details.

He was astounded when I told him I’ve never lost a number since I first started putting names in my computer. He asked me how I did this.. I said that it was really simple, but a long story – so here is the story…

My calendar and address book challenge

Prior to 1991, had a pocket sized address book with my contacts phone numbers on it.

When I started working as a freelance artist, I found I needed to keep one of those special business card wallets and then when that got full, I got one of those plastic boxes with the alphabetized dividers.

I never really knew whether to file business cards under the name of the business, the role (eg, ‘p’ for plumber) or the person’s last name – so I often ended up shuffling thought them trying to find someone.

In 1991, I started putting people’s contact details on my computer. Initially I used HyperCard stacks on a little Mac, but my whole process was a little ad hoc, as I couldn’t carry the Mac around.

Then in 1993 I found a great solution, a program called Claris Organizer, which was later sold to Palm Inc. and was re-branded as the Palm desktop software. I used this to put information into because it made finding details a breeze.

Things really became useful when I bought my first Newton Message Pad 120 in 1996. Not only could I syncronise all the information on this beautifully designed little computer with my desktop computer, but thing was so far ahead of its time in many other ways.

I could hand write notes that it transferred to my computer as text, which with a little editing saved me typing everything from notes I’d scribbled on a pad. (It also forced me to write more neatly, otherwise it typed rubbish).

Once I accidentally bumped it off a 6′ high cupboard and it landed on tiles. My heart went through my throat – but it was entirely unscathed.

Fortunately, all my information was synchronised with my PowerBook 190cs and my desktop workhorse, the Power Mac 7300, so no data was lost.

Strangely it met its doom when I knocked it off a coffee table onto shag  pile carpet! It landed on its top corner and glass screen cracked. That was a very sad day. (I still have the little bugger in a box in the shed.)

Unfortunately, Apple had discontinued the Newton by this time so I had to look for something else to replace it. I settled on the Handspring Visor (a red one) which ran the Palm OS and syncronised perfectly with both of my Macs. All my data transferred perfectly from my computer to the new PDA.

I kept my eye out for another Newton on the secondhand market, because, as small and cool as the Palm OS was, it didn’t have anywhere near the functionality of the Newton.

Fortunately, I eventually acquired a secondhand Message Pad 2100, the best Newton ever made. This thing was so much better than my old one and had the best handwriting recognition of anything I’d seen then or since. 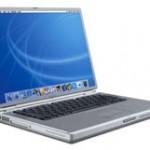 Unfortunately, by this time I had upgraded my laptop to a PowerBook G4, which not only ran the new Mac OSX operaing system but it only connected via Firewire, USB, Ethernet, wireless or bluetooth – The Newton needed an old fashioned serial port to synchronise.

Fortunately, I soon found that there were a number of ways to connect the Newton to my G4. The method I chose was to plug my old Ethernet PCMCIA card (that I used to use with the PowerBook 190) into one of the two PC slots on the Newton and then just connect via Ethernet – and it worked fairly well, but it was sometimes a fiddle to get the data to transfer. 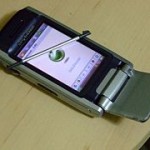 In January 2000, Apple announced iTools, a free service the backed all your calendar and address book information to the web (their servers). I signed up and from then on my data automatically backed up to a third location. This service became known as .Mac in mid 2002 and became a paid service – now called MobileMe, which I still use.

Then in 2003, I found the answer, a new phone, the Sony Ericsson P900. The writing on the box said that it only connected to Windows 2000 or Windows XP and the sales girl at Singapore Airport didn’t want me to take it because there was no way it would syncronise with a Mac. But I just didn’t believe it, after all it ran the Symbian OS, so I figured it would probably sync over Bluetooth – which it did – without a hitch.

Then I got my first iPod, a 15 GB model, (what an awesome piece of technology)… Unfortunately, I suddenly found I didn’t have enough pockets. I had my mobile phone, the Handspring (Palm) and the iPod… Damn, when will they just put all this stuff in one device!

Unfortunately after about 12 months I lost the P900, so I bought a cheap Sony Ericsson T610 – once again everything was on both my laptop, my desktop computer and on .Mac (the web), so it just all synced perfectly with the T610.

Fortunately, my old P900 was found and handed in – believe it or not I got it back about a year later. So I started using it again until March 2007 when I bought a new car. Unfortunately, The car had Blutooth 2.0 and my P900 used an earlier form of Blutooth and didn’t talk to it. So, I got another new phone, this time a Noka E65.

Whilst the Nokia talks to the car ok, so I could use the handsfree, and it syncronised all my data from my Mac via Bluetooth, but it is a comparatively dreadful phone to use. The interface requires an inordinate number of clicks to do everyday tasks and it doesn’t have the PDA functionality that I’ve been used to for so many years.

Fortunately, Apple comes to the rescue again with the iPhone, which is an awesome phone, a super iPod and a PDA and a computer almost everything you can think of…(with over 25,000 applications – what can you say!)