Ingenuity at a wedding – congratulations

One of the things that I guess all brides fear is a wedding day catastrophe, such as; the groom not turning up, the wedding car breaking down, losing the ring, a family squabble etc. 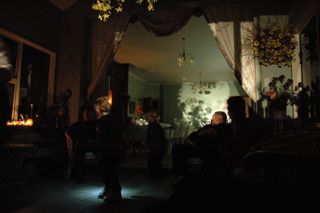 Now I don’t know anything about running a wedding function centre, but I can think of quite a few people who would be in a flap if they had a crowd of guests waiting to be fed and dinner only half cooked.

Do function centres have emergency plans or was this all done on the fly? I don’t know, but I was impressed by their composure and ingenuity.

There were no excuses from management, no apologies; everyone simply got on with the job of finding alternatives ways to cook and serve the guests, so that the whole night was memorable not just for the lack of power.

A large wood fire was lit in the lounge and meal preparation simply moved from the kitchen to the top of the fireplace in the dining area. Torches were found, candles lit the barbeque was lit out the back and staff carried on seemingly without missing a beat.

Their job was made that much easier as none of the crowd complained; we just continued conversation, ate more hors de ordervs and drank more wine.

Congratulations to the staff who pulled off a splendid meal without missing a beat.

Many small businesses could learn from this experience. Often we are quick to find excuses for not being able to do a task rather than to simply buckle under and concentrate on finding alternative ways of achieving a similar result.