How Old is Too Old?

Thelma Davies had never played sport and never run in her entire life until 1985, when at the age of 62, and with no training, Thelma completed her first Sydney City to Surf. 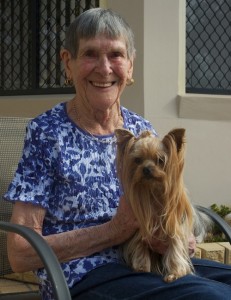 Thelma completed 21 marathons, her last being the London Marathon which she did at the age of 80.

In 2007, aged 84, Thelma ran her last City2Surf after having a cardiac pacemaker installed. She was advised that this probably wasn’t a good idea and since then has kept fit with regular Tai Chi classes.

Earlier this week I met up with Thelma, who will have her 91st birthday later this year. We had a great chat and she told me the story about how she came to take up running at the age of 63 and the fascinating journey that running opened up for her.

Thelma had done yoga for years until in the early 1980s, when aerobics classes begun to gain in popularity, Thelma attended aerobics classes at Smithfield RSL Club where in 1985 her aerobics instructor, Kerry Duncan, coaxed members of the class to run in the City to Surf.

With no previous running and no running training, Thelma finished her first City to Surf in 117:13. She said she was exhausted and thought to herself, ‘I can do better than that’.

She started training while still maintaining her aerobics classes (which she did for 26 years). She joined an athletics club and competed in many masters events.

‘For a long time I did a fun run every Sunday,’ she stated.

‘I remember in 1985 when I met Cliffy (Cliff Young) at the City to Surf. We were interviewed together at the start of the race for radio by that guy, you know, Con the Fruiterer (Mark Mitchell).

That was a great year because we were right at the front for the interview and we ended up getting a preferred start and I’ll never forget, Cliffy said to me; Take it easy Thelma.’

As I listened to her story, one of the things that really impressed me was her last marathon.

At the age of 80, Thelma had decided that she wouldn’t do anymore marathons, but in order to convince her 60 year old friend Marie Rogers to run a marathon, Thelma suggested that they both go to London and run the London Marathon.

‘The London Marathon is fantastic. If you only ever run in one, make it London. Everyone thought we were wonderful because we were Aussies,’ she said.
(I suspect the Londoners probably thought she was wonderful because she was 80 and running a marathon!)

So, my question remains; ‘How old is too old?’