History of the City2Surf and me

The City 2 Surf has formed a part of my life for the last 39 years. That sounds like a long time doesn’t it!
When I ran the City to Surf (now referred to as the City2Surf) in Sydney in 1971, it was promoted as a ‘family fun run’.

The City2Surf has been held as an annual event in Sydney since the first run on September 5, 1971. It was conceived by the staff of The Sun (now The Sun-Herald) and inspired by the Bay to Breakers event in San Francisco. 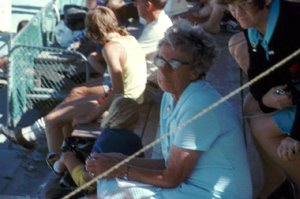 Grandma Nea timekeeping. She was even a timekeeper in the 1956 Olympics

My grandmother Nea, had been an athletics official since the 1950s and was on the organizing committee for the first City2Surf, in her capacity as an official with the NSW Women’s Amateur Athletic Association.

My dad was a member of our local athletic club at the time, and invitations to participate were sent to all the registered athletic clubs. The organisers were trying to make this the biggest run in Australia and my father was keen to see the event succeed so he entered both of us in it.

It was the biggest field of runners any of us had ever seen. I can recall that there were quite a few people there that my father knew from his days in Sydney athletic clubs.

The whole event was very exciting and I recall my parents discussing my participation beforehand. I did no preparation of course, after all I was a little kid, but I remember my father being quite confident that I’d be able to do the distance, despite having only ever run a maximum of 3km in the past.

The original run was 9.4 miles (15.12km) and started in George Street outside the Town Hall. But 15km was nothing to my father who had represented NSW for a number of years as a 50km race walker.