We have had many storms and record rainfalls over the last few weeks and the place is a quagmire.? The dams are all bursting over spillways and the creeks are all swollen, there is some minor flooding and quite a few homes have sustained water damage. 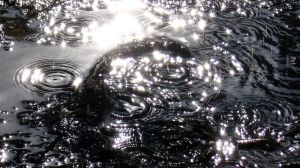 On Saturday, it was a fairly clear day and I spent the morning helping a friend remove over 30 sleepers from his garden, some of which had white ants in them.? When took them to the tip, it was so muddy that the car became bogged up to the axles.

It took an hour to pull it out (thanks to a guy with a diesel Nissan Patrol) and by the end of the morning; the nice new Ford was caked in mud inside and out and I was physically spent.

Later that evening, we had some guests for dinner. The sky began to blacken but I thought I might just get a barbeque done. No sooner had I turned the barbeque on, it bucketed down and I retired to the kitchen to cook.
Sunday morning, I opened the garage to discover that it had been awash with water the previous night.

The thought struck me that carpet on the garage floor wasn?t such a good idea right now. I then spent hours lifting and moving things. A few cardboard boxes with papers and books stored in them looked a little worse for wear, but otherwise it will just take a while for things to dry out.

Unfortunately, storms are predicted for the rest of the week.

I think we can safely declare the drought over for now.