So Ends Another Jam-Packed Weekend

It’s Monday again, but the weekend didn’t seem like a weekend at all. Lately every week seems to just blend together as one big one. 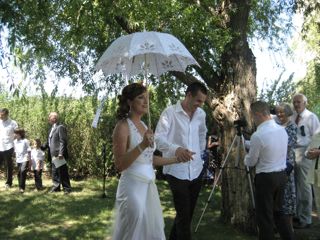 It wasn’t all work we were doing, but we just didn’t stop. We had a friend’s wedding to go to on Saturday, but had a lot to do beforehand (among other things we had to buy a wedding present ‘? nothing like leaving it to the last minute!)

But before we could go to the wedding we had to workout how we were going to get Alex and his gear to the band competition whilst we were at the wedding.

The final plan was to drive two cars and leave one at the gig with the guitar and amp in it and give the keys to the kids so they could get the gear when the time came to set up.

It was a nice garden wedding in perfect weather followed by good food and great conversation, unfortunately we had to leave early and rush to the other side of town in time to watch the boys competing in the band competition. 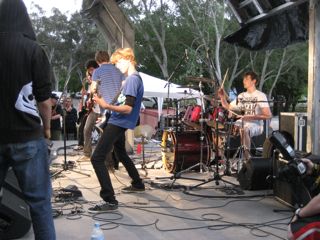 As we pulled up, we could hear them blasting away on stage ‘? they were running ahead of schedule and put the boys up 20 minutes early.

Sunday wasn’t much different ‘? we still had a schedule to keep and a pile of things to do and places to go. (And I managed to fit in mowing the lawn.)

Luckily tomorrow is a Public Holliday ‘? tells all thank the government for giving us a day off to go to a horse race.