We have two dogs, Buddy, the older one and Shadow (no prizes for guessing he just follows Buddy around all the time). As Buddy has started getting older, Shadow has really begun to irritate him. 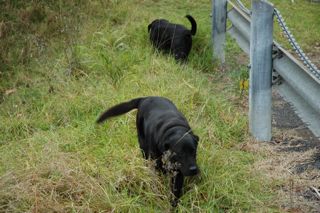 Buddy and Shadow in the behind

Because Buddy is sick at the moment we have separated them into different yards. Buddy spends a lot of time inside and Shadow has become a bit neglected.

I had decided to take Shadow for a walk up the mountain before breakfast this morning, so out into the cold wind and rain I headed.

Usually we take both dogs for a walk, and there is a point where we always release them for a run. When I got to this point this morning, I let Shadow go and something interesting happened’? his behaviour was different.

Normally, Buddy would run but always stay in fairly close proximity whilst Shadow would run off at a great pace and be well out of sight.

On his own, Shadow acted the way Buddy normally would have done – and this got me pondering’?

When he was with Buddy, Buddy was the responsible one and so he could act irresponsibly, without a care in the world. Now that Buddy wasn’t there, he assumed the role of top dog and I became his responsibility.

When teenagers are together in a group, there is no need for anyone to take responsibility, but when a teenager is alone and is given responsibility, they will generally ‘step up to the plate’.

Similarly, when adults are working in groups it is easy for some people to act like Shadow, and leave it to others to take responsibility, but if any one of them were on their own and had to get the job done, they would probably ‘step up’.

What if more people we went out of our way to give others the opportunity to take responsibility more often?