Chrysler files for bankruptcy – so what does it mean to me?

Now that Chrysler has filed for bankruptcy, does this mean my 1938 Plymouth will go up in value? (after all, an artist’s work always goes up in value when the artist passes on!) 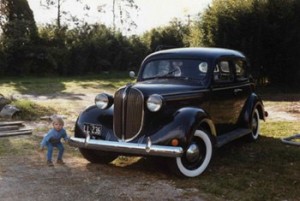 Frankly, I’m not shocked by this announcement, the US auto industry has been struggling for a long time and IMHO, Chrysler have made some pretty unappealing offerings in recent years.

I do have a soft spot for the brand, as my first car was a 1938 Chrysler Plymouth (which is now in storage and hasn’t been driven since 1985) but when it has come to buying new cars, I’ve always gone with the European brands.

I used to drive to school in this old beast in the late ’70s – and the kids nick named me Al Capone, (because it looked pretty ‘gangster’ even in the 1970s).

It certainly was a tough old girl. I also bought another ’38 Plymouth for spare parts in the early ’80s, but I haven’t needed any of the parts because my original hasn’t driven anywhere since it went into storage in 1985. 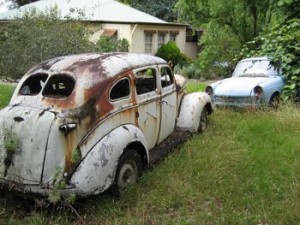 Another 1938 Plymouth I bought for parts

I did a few good interstate trips in my Plymouth, but driving a 1930s car in the 1980s was a little slow, particularly as my daily driver in that time was a slick lo0king Audi 100 with climate control air conditioning, cruise control and all the other mod cons.

Fixing up my Plymouth up is one of the projects I’ve had on the back burner for a long time now (you’d never guess!).

One of the boys, Callum, has just bought his first car, an old Nissan, so I’ll most likely be digging out my overalls and helping him tinker under the hood any day now.

Perhaps getting down and dirty with Callum may be the incentive I need to get me started in cleaning up my old beast and blowing the cobwebs out (literally). I know I’d rather be working on my old Plymouth than an 80’s Nissan.