It used to be that I really looked forward to birthdays, but after half a century the magic seems to have faded away!

No two days are ever the same for me, but as birthdays go, it was pretty ordinary. 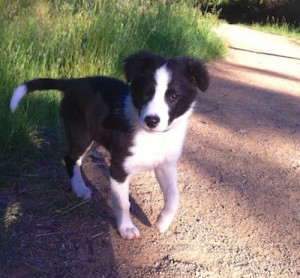 This is my new dog, Brian. Impossible to run with yet because he is such a ‘chick magnet’, we have to stop every 50 metres to be patted by strangers

I got up and walked the dogs for a few kilometres, then returned for breakfast and a freshen up, before sitting down to do some writing and a postcard design that I’d promised a client before 9am (delivered at 8:50am).

Throughout the day I received birthday phone calls and got dozens of Facebook messages; mostly from people I haven’t seen or heard from in a long time, but other than that it was a pretty normal Monday.

I had a bunch of jobs to do in the morning, which I actually got through pretty quickly, despite the interruptions, then in the afternoon I got stuck into doing some tedious web and computer related housekeeping. When my wife got home at 4:15pm we took the dogs for another 2km walk and had our usual afternoon a chat about the day.

After a half hour break, I set about preparing copies of my report for the Rotary Club Board meeting, quickly got changed, grabbed a beer from the fridge and headed over to the cottage for a 7pm start.

The meeting kicked off with jovial chat over a pretty ordinary pizza, before warming up to vigorous and seemingly heated debate over some very serious business issues. By 9:50pm the dust had settled and I was home by 10pm.

I brewed some tea and sat down with my wife to watch a bit of light entertainment on TV. She’d saved me a piece of pavlova, which washed down nicely with the tea.

Relaxed again, I sat with my iPad in my hands and caught up with the latest happenings around the world before we headed to bed just before midnight.

It is a lucky thing Christmas is only 42 days away … but who’s counting! 🙂