An Adventure Before Breakfast

One of the things I often do is go for a jog before breakfast. When I?m traveling, my morning jog can be a bit of an expedition, as it was a few days ago.

We were staying in a hotel in Wagga Wagga for a few days and as usual, I?d packed some exercise gear. I don?t like running along the roads if I can avoid it, so the night before, I pulled up Google maps to find a route for my morning jog. 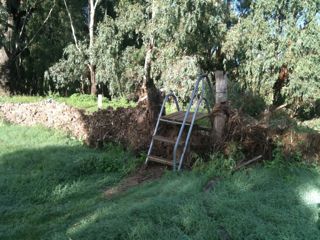 This is the first of three stiles I had to cross. Note the flood debris on the fence.

I was in luck, there appeared to be a good path following along the edge of the river for three or four kilometres in either direction from the hotel.

The path was not easy to follow, it appeared to join with a road and then veer off into a track. Recent rain meant that there were plenty of puddles to jump over, so my morning jog was a little more of a steeple chase.

It wasn?t long before I found myself in a labyrinth of 4WD trails criss crossing through the bush. The trail went cold and I stood there bamboozled until I spotted a stile over a fence covered in flood debris.

Sure enough, over the stile was the track. The whole area had been flooded in recent months. It was muddy, there were many wash-aways, flood debris, and fallen trees. 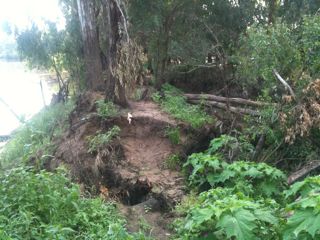 One of the wash-aways along the track

Running through the tall weeds covered in heavy morning dew meant that my shoes and shocks were getting wetter with each step.

My return trip was a little quicker, not because I was running faster but because I didn’t have to stop to try and find the path.

When I finally got back to the hotel, I was tired, wet and very muddy but felt totally refreshed and ready for the day.

As I sat in the hotel eating my breakfast, I looked around at the other travelers and wondered if they realised how much of life they missed out on this beautiful morning?