I got up just after 5 this morning and went off for my morning jog. The weather was cool and overcast which is such a welcome relief from the last few weeks. 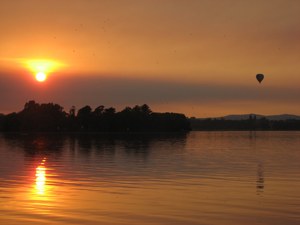 I took this pic whilst jogging one morning a few years ago. The dramatic colour is caused by bushfire smoke haze

I fully expected the air to be thick with bushfire smoke but it was crisp and fresh. Usually when there are big bushfires around, such as those in Victoria, the smoke drifts over our way.

As I jogged around the lake watching the dawn of a beautiful new day, my thoughts remain with those devistated by the fires. In my post yesterday I was moved by the news that 14 people had been confirmed dead and today I wondered what this morning’s news would bring.

Unfortunately the death toll is now up to 108, with loss of more than 750 homes and many people are still missing and many fires are still burning out of control.

I just watched the morning news and a young man was being interviewed whose wife and kids were in the family home and that the fire had been through the town destroying many houses but still has no idea as to whether or not they are alive.

Whatever your worries are, there is a good chance that in the overall scheme of things, they aren’t that important.